Closing Down The Organization’s Deep Web 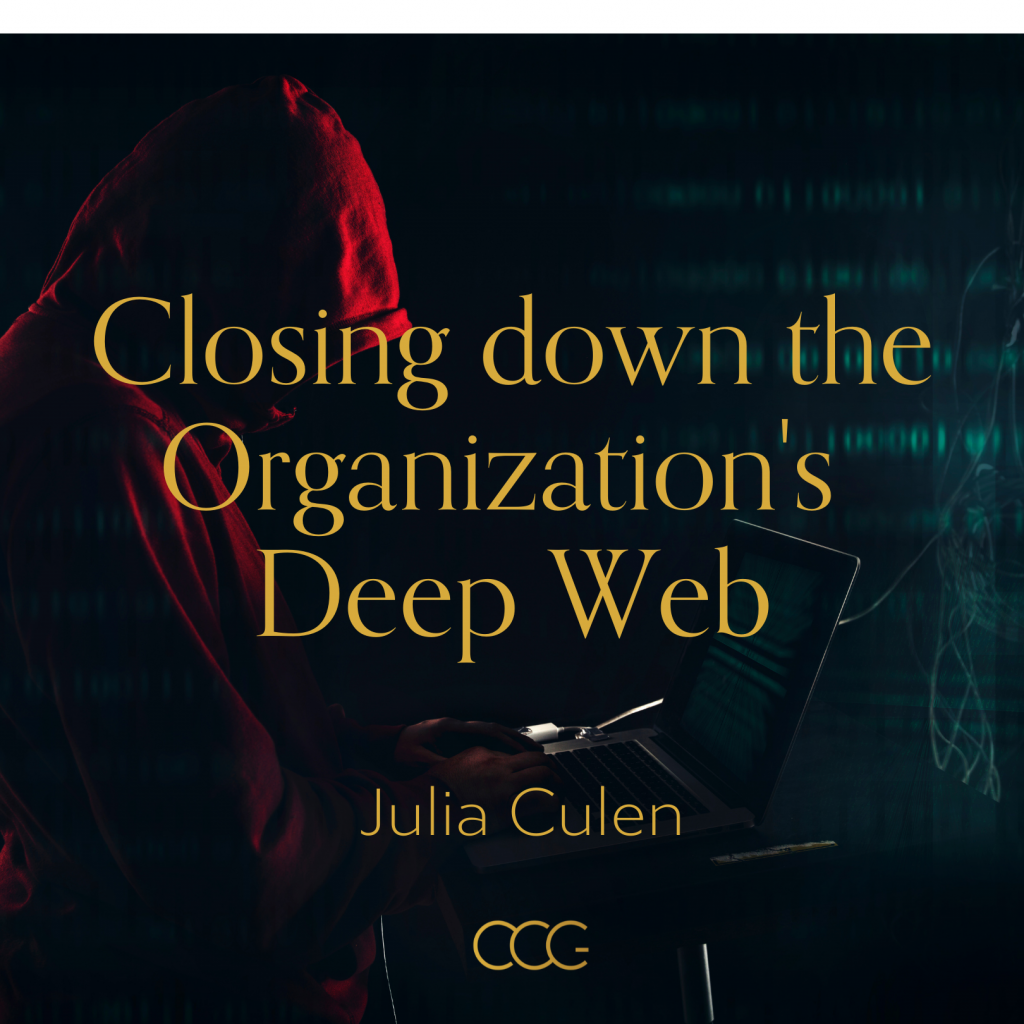 The deep web of organizations

While some organizations have a very open and transparent way of communication, information and decision making, there are others, whose internal structure may be compared to the internet: only a fraction of its communication is public, open and transparent. The way bigger part is behind hidden doors, secret circles of power, shifting alliances, mutual agreements and collusions. The means of communications are mostly over the phone, private dinners, social media groups (Whatsapp) and secret meetings. People are drawn into it with a confidentiality vow “I tell you this in secret, but don’t tell anyone.. ” or “this is Confidential, I should not tell anyone, nevertheless I tell you, but don’t tell anyone..”. Like the Deep Net one needs access to this space, an invitation or a certain action.

What is the Deep Net?

There are millions of pages on the internet however – like and iceberg – about 90% of the pages are not indexed by search engines like Google, Yahoo, Bing, etc – called the open or surface web. Which means only a tiny portion of the internet is accessible through search engines or standard means. They are hidden. The Deep Web is the huge part of the internet that cannot be accessed through standard search engines or the pages that are not indexed in any way. While the Deep Web is mostly legal but private, confidential and internal information (like University and Company Networks) and can only be accessed with a specific address and an Account/Password, the Dark Web is a small part of the Deep Web that is completely hidden and mostly used for illegal transactions for the worse (drugs, weapons etc) or the better (safe space for journalists or dissidents). 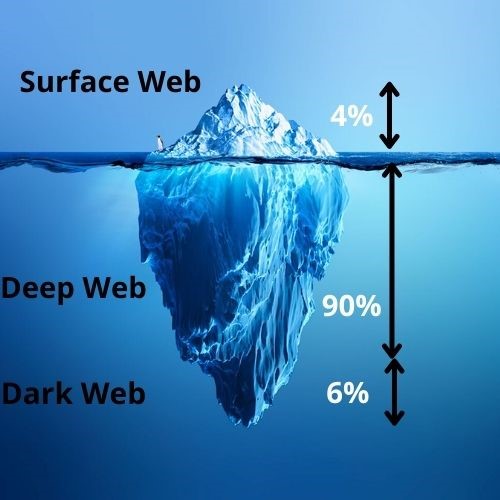 In extreme cases there is also a fraction of Darkness in Organization: this is where illegal activities take place, be it internal or external blackmail, illegal businesses or agreements agains all rules. This can go to the extend of criminal actions and the undermining of compliance regulations.

Most people in organizations are confined to the “Surface Web” of the organization: they have a feeling that many decisions are being dealt behind back doors and are blinded with some narratives, but they cannot tell for sure. They are excluded from these power centers. Like visitors of a theater, they can only see the font stage, what they are supposed to belief and see. The back stage stays hidden and in the dark.

The problem with the deep/dark net of organizations

If the hidden part gets too big it undermines trust, effectiveness and integrity of the organization and literally everyone working in it, even if not active involved. People feel, they are part of an infected and somehow corrupt system, which has a strong negative effect on intrinsic motivation and trust.

In my observation in many cases it is not the actual activity that is problematic, but the secrecy about it. The not mentioning, the hiding, the necessary lying to cover up the true motivation or genesis of a decision makes something maybe even reasonable toxic and destructive. When there is a “side intervention” to influence a certain outcome or concept, why not make it public: Mr. or Mrs. X hast this wish or proposal, lets discuss it. No, in most cases people make up a story to hide the information. They think these are white lies, but in the end of the days it is a lie.

What is the result? People get suspicious, they don’t know who and what to believe any more. They are unable to distinct between truth and fake, get confused, powerless and desperate. At some point the stop trusting their own perception and judgement. At a certain level contradicting information or people’s experience is being put at doubt over and over again “no, that never happened, you remember wrongly”, we could event talk about gaslighting: a way to make you belief you can’t trust your experience. This happens when people lie about what happened, or deny it. And the worst: people start to believe their own lies.

We get into a situation that can be manipulative and abusive. Many times we have people with a narcissistic-manipulative personality trait involved.

People start to copy the behavior and form their own circles of trust, leaving others out and inscription the pattern deeply into the organizations culture.

More and more energy flows into keeping things in the dark, more and more people are involved in a network of lies, secrecy and co-dependency, even blackmail (I know this about you, so you better comply.. ). The fear for hidden information to surface is huge, as it could cause a scandal. The latency of an organizational breakdown or outburst is scary and threatening. People are afraid their hidden actions could be exposed. Guilt, fear and shame become the guiding emotions, leading to more of it. Certainly this is not what you want.

The dangerous effect of normalizing – from thriving to surviving.

Normalizing, or habituation is a coping mechanism – we tend to integrate even difficult and hurtful experiences as normal, in order to suffer less. We get used to things that are not OK, we normalize behavior that is unethical and harmful as “this is the way it is here”. It is also an excuse to non-action and to cover up our cowardice, but oftentimes we don’t see alternatives or ways out. We feel as victims and try to cope or flow with a situation that impairs our dignity and integrity. To some degree we give up, we resign and withdraw. We go from thriving to surviving. (Thank you @Aamina Simon for this quote)

100% transparency is not the way

I am not saying, that organizations and leaders need to be 100% transparent with everything at all times: there are situations, where decisions need to be made backdoor, as they could create harm or are confidential. This is not always easy: Once I was invited to pitch the merger of two departments in a bank, I won the pitch and in our first meeting I was told, that this was a fake pitch: the actual project was about the preparation of a banking split: there was an unclosed deal to sell the one part of the banks business to a foreign bank, leading to a split throughout staff and the organization. We had to prepare an incredibly complex Organizational Change without being able to talk about it, as this would have endangered the deal and create fear across the employee base. While I understood the situation it was an incredible difficult situation to reconcile. So sometimes projects have to be conducted behind closed door, but only for a limited time and a very strong reason.

The way out: don’t do things you need to lie about

In the end of the day it comes down to a very simple principle we can all apply to distinct between – what is over or below the surface: If you need to ly or cover up a certain action, don’t do it in the first place. Unless you have a really good reason and necessary to prevent damage, but to be honest, these cases are very rare. Most of the time the action would simply bring you and advantage in power, money and dominance over others. I have known too many people who propagate that all they want is the best for the company, when in reality the try to get the best results for themselves. If people live too long in these narratives they start believing their own lies.

I have seen too many times the damage this does to organizations and people’s psyche and I recommend to shine light into the deep web and bring the bigger part of it to the surface for the sake of everyone. In the other way we have a few winners (if at all) and many losers. You will cultivate an unhealthy and unsustainable organizations with huge costs and tolls.

The way out: full transparency. Full transparency means to be open about what can’t be disclosed yet. Stop using lies as a socially fully accepted means of communications. Trust that people can deal with the truth.

Change it, leave it, or own it

I share this blog post because I hope to help you see what is going on and change it. For me it is really difficult to deal with the suffering I observe in organizations and the inability or unwillingness of people to change something about it even if they can see it. I am always pointing towards these topics but I have to admit that oftentimes my efforts are fruitless. There is no hearing and I eventually stop in order to not make things worse for my clients. Do people really want to live in misery? Do they believe this is how good as it gets? And that there is no other way, when in reality of course there is? It is hard to watch but everyone, who stays there, accepts it is complicit to it. So the only other alternative is to fully own the choices and stop being a victim. Maybe this is the other best option. Change it, leave it, or own it.