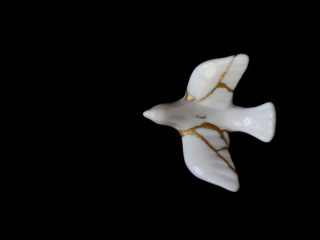 With the killing of George Floyd, a lot of us have come to realize that the system is broken, much more broken than we’d previously thought. I was laying next to my toddler in bed, reading the news headlines about George Floyd on my phone, and sadness and rage coursed through my body that night and the next several nights. All of a sudden, things are not okay, and they haven’t been okay. I have just been sheltered from, or numbed to, the brokenness, the trauma and pain. Whether or not things feel broken depends on where one is in the power structure.

The same process happened a couple years earlier, at a spiritual organization that was my place of practice. Observing an injustice taking place, mowing people over as if they didn’t matter, with untruths used to justify the actions and say “everything is okay,” I was shocked into the realization that it hadn’t been okay for a long time. We were using various degrees of spiritual bypass to avoid rupture and get on with our lives. Seeing the organizational response to “something breaking” was more telling of how much the system is broken than the original injustice, as we have seen in the American political response to the murders as well. This is a useful learning that I will take to future organizations.

I can recall a similar situation in a workplace, and I’m sure it has happened to you too.

What do we do when we recognize that things are broken, in a big way?

Before I try to answer that, I want to bring up a more concrete question, which others have asked also regarding police actions — what happens when the man is down? What does one feel when watching someone’s life slipping away, and what do they do?

A few years ago, I met a policeman who was playing with an impressively skillful German Shepard. We got into chatting and he shared how even after someone’s critically wounded by a bullet, there’s oxygen in the blood for 45 seconds, enough to run a very far distance and endanger the police. Thus, the police are trained to continue shooting. He seemed like a nice guy, deeply connected to his ex-police dog. Everyone has humanity, and everyone can be trained to act with incredible violence — there is always risk and they are trained to act with maximum force, rather than vary their response with the situation.

Humanity has been through countless events, many still in collective memory, where anyone can become an unfeeling robot, doing harm in the name of liberty and justice. Anyone can be trained to be disconnected to an “other,” to a part of themselves, even easily conditioned to do so, as the famous experiment in which participants were told to give electric shocks has shown. Well, almost anyone — a tiny percentage has enough integrity, or we can say connection, to say no to an unjust or unreasonable system.

My little daughter, who just turned three, grasped the concepts of life and death early. She often bends down to dead bugs and snails, birds, occasionally flowers that have fallen, and says in her little sing-songy voice, “I’m sorry.” She came up with this on her own. More than once, she has run back to a dead bird, and said “I’m sorry” with more focused attention, and then run on. 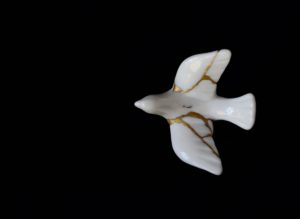 What do we do when things break?

Brené Brown says that connection to others is what we all want. I would enlarge that insight to include connection to all things, to the deepest part of ourselves. When things break, perhaps we can start with re-connecting. When we feel the pain of rupture, chaos, change, there can be a strong desire to defend, to fix, to go back to how things were before the break. Yet, that impulse often ignores the fact that the system was probably broken before there were symptoms of breaking, it’s a refusal of what is. Accept the break as a sign of change, of transformation, as sure as the cycle of birth and death. A sincere “I’m sorry” to the situation brings us to stillness for just a second, reconnecting us to life in this instance.

Then we listen. Listening to others, listening to ourselves through writing and walks, listening to silence through poetry and contemplative practices. Pain that seems unbearable takes on a different quality when listened to and connects us to all those who have been wounded. Kahlil Gibran said, “Your pain is the breaking of the shell that encloses your understanding.” In Buddhism, we talk about listening to the cries of the world. On the night of George Floyd’s murder, I listened to the cries in myself and of the world, as many millions of people did.

In this culture of fixations on progress and happiness — on things we measure going up and to the right — many people are subtly afraid of breaks to that progress, and thereby being in a depressed state. As psychologist Andrew Solomon has wisely pointed out, the opposite of depression is not happiness, it’s vitality. It’s been a challenging year, no doubt, and may be so for a long time to come, yet when I look at myself and those around me, there is so much vitality. We’re life energy waiting for every opportunity to come forth. It is connection and vitality that allow us to act with integrity — from trust and not from fear.

In March, a friend talked about how she was preparing for the COVID lockdown, and made a distinction between preparing and planning which I have found to be helpful during the pandemic. Preparing, on the one hand, is like winter, where we rest, have rituals and practices of gratitude, taking time for the subtler energies and internal conditions to be right — preparing is a time for alchemy, for tao. Planning, in contrast, is a coming forth of energy, an active designing phase and putting parameters in place, shaping the reality we want. Planning can be compared to spring.

When things break, we are being asked to look at things from a higher level. We’re challenged to use our language more consciously, to use creative practices to transform and transcend what may otherwise be perceived as a problem. The opposite of death is not life, it’s birth, of something new. When Japanese craftspeople fix broken ceramics with gold, which is called kintsugi, the intention is to create something that is stronger and more beautiful from something that is broken and useless.

This is alchemy, like the transition from winter to spring. There is grief built into growth, grief making love stronger.

In our capitalist world, we tend to insist on too much and too consistent of progress. Just like forest fires that have been suppressed, eventually there is a bigger outbreak. Though the resulting breakdowns are often difficult to endure, these systemic readjustments are usually necessary, even inevitable.

Recently, a teacher in my spiritual lineage is starting to heal the brokenness and trauma in our sangha, with remarkable results. A more cohesive community and more integrated use of skillful means will come from this. I see a similar pattern emerging professionally. This spring and summer, countless communities of practice and networks with deep shared intentions have been launched and strengthened, and more integrated applications of skillfulness are coming forth in every way. These developments give me more than hope. They give me connection and vitality.

What does Business have to do with Consciousness?

When we, the CCG Advisory Team meet every other Monday evening we spare some time…

CONSCIOUS CONSULTING: What it is, how it works and why it matters

2020 was a year full of challenges and new situations for all of us. No…

We, the CCG advisory Team explored the following question: What are important principles and qualities…

It is a dis-integrated time. We feel the chaos and the tension, the incongruence, in…

With the killing of George Floyd, a lot of us have come to realize that…

Time to shift the paradigm from separation to connection

If we look at our key burning questions like climate change, inequality with all its…

Meditation does not kill motivation – but it ends resignation

The instrumental benefits of Mindfulness Meditation are widely researched: stress reduction, increase of resilience and…